Mister Donut Philippines is starting to realign with the look and feel of Mister Donut in other Asian countries. Mister Donut’s branch in Megamall now has a Japanese look from the outside. On the inside Mister Donut has a comfortable yet playful look to it. They call the newly renovated Mister Donut as Mister Donut Cafe.

I confess that I don’t really frequent Mister Donut. But I’m glad that Mister Donut Philippines invited me to attend their blogger night. During the event, I was able to get acquainted with what they have to offer.

Lastly, Mister Donut’s French Cruller is a pastry that has a light and airy texture. If you’re on a diet, you should grab the French Cruller for it has the lowest calorie count compared to Pon de Ring and Dossant.

Aside from introducing the aforementioned donut products, they are also catering to the Filipino needs and taste. For people who work in Ortigas you’ll be glad that there’s another food chain for you to dine in from 6am – 10pm. Mister Donut Cafe in SM Megamall will be serving all-day breakfast meals such as beef tapa, gourmet tuyo flakes, chicken tocino and continental breakfast. They also serve a Donut Burger which is made of premium beef patty and a glazed donut will serve as the bun. Pasta and sandwiches are also available for people who are craving for pasta and sandwiches. They’re definitely stepping up their game.

Mister Donut still wants to be the donut brand for the masses. That’s why their menu is filled with foods that are easy on the budget. You could get a full meal from Mister Donut Cafe with only a hundred peso budget!

There are currently five Mister Donut Cafes in the Philippines. They are located in: Greenhills, Robinsons Ermita, The Prtal Greenfield, Mactan Newtown Cebu and SM Megamall. There will be more Mister Donut Cafes by the end of the year.  I personally can’t wait for a Mister Donut Cafe somewhere in Quezon City. I highly suggest for you to try the Pon de Ring. This donut will definitely change the way you look at Mister Donut.

6 thoughts on “Mister Donut Megamall Gets A New Look” 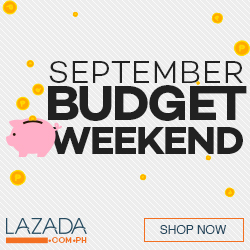